Skip to content
My daughter, Button is obsessed with Helium balloons. Every trip to a store or supermarket, and she adds to her balloon harem by 1. Disney balloons, random Chinese character balloons, birthday balloons, emoji balloons. As long as they float and bob, they are A-ok in her book.
A couple of months ago, she found a particularly garish looking smiley-emoji balloon. Someone had decided that the basic two eyes+ toothy grin combo wasn’t enough for this balloon. NOO, it had to have those extra large eyes and a creepy smile that would impress a serial killer. And for some reason, the artist who designed the balloon had even added a little red nylon tongue extension which happily flapped up and down when the balloon floated. All in all, a pretty macabre toy.But guileless kids, full of innocence loved the damn thing and Button was no exception. So we got it home and my kids spent countless hours playing with it.
Over the next week, the balloon slowly lost some of its helium. When at first, it needed to be weighed down with a small rock; now it sort of floated aimlessly. Even the nylon tongue lay limp, only flapping whenever the balloon happened to float near an air vent. The kids moved on to other toys, and the balloon hung out at odd locations in the house, sinking lower and lower every day.
One Saturday morning, my mom (who’s visiting us from India) was up at her usual 5 am and went to the living room to do her Pranayams and Yoga. Mid breath, she spotted something floating near the edge of the kitchen. Squinting in the dark, she recognized the sinister smile. Now my mom is a pretty awesome lady – equally talented at whipping up the perfect dosa and running half marathons without breaking a sweat. She doesn’t scare easily. So while the floating balloon made her pause, it didn’t really increase her heart rate. Well, at least not until she opened her eyes again and saw the balloon had drifted a couple of steps closer.
The air vents were off and she couldn’t really sense a breeze. A mild sense of unease crept into her. She finished her pranayams quickly and decided to take action. Grabbing the floating offender, she pushed it into the hallway bathroom. A few minutes later, she heard a small rustling sound. Looking up, she saw a half leering face smiling at her from the corner of the hallway, tongue lolling out. The balloon’s string had somehow escaped the bathroom knob (she still swears she’d tied it securely!) and the stupid thing was now bobbing back to the hall, like the world’s slowest zombie.
She turned her back to it and started her stretches. She could sense movement behind her. The balloon kept floating back and forth, back and forth.Bobbing slowly. Simple harmonic motion…. at its scariest.
It then got worse.
Every time she finished a set of Yoga asanas and opened her eyes, the balloon had floated closer. First a foot. Then some more. Now she was properly scared and was half considering waking me up. Then she remembered her brave ancestors who’d fought at weddings for extra vadas and kheer.Channeling their courage and never-give-up spirit, she decided to ignore the balloon. For the next 15 minutes, she stretched and leaned and bent and twisted. Breathing a little harder than usual, she was almost finished when something flitted across her face. The next thing I know, I was woken up from a nice dream by my mother, who looked 90% terrified and 10% embarrassed.
It was dawn pretty soon and feeling smug and heroic; I marched to the living room. The culprit was floating insipidly near the kitchen. I tied the string to one of my old stilettos and put it in the backyard. My mom smiled at me sheepishly and I assured her that it’s ok to feel scared, while managing to stifle some giggles. We both sat down for some coffee and banter.
That afternoon, my mom was roused from her nap, by a little squeaky voice singing “Happy birthday”. She felt tiny hands tapping her face and upon opening her eyes, she saw my daughter proudly beaming. “Wake up wake up Renu (she calls my mom by her name).It’s your birthday today. Look, I got you a shoe”.
In my daughter’s hand was the stiletto. And suspended 2 feet above that, was a wrinkly old balloon. Smiling and tongue flapping.
Epilogue: Weeks have passed. Renu goes by her day, a stickler for routine. Her face is cheerful, her movements efficient and graceful. But if you look deep into her eyes, you can see the shadows there. Memories of the horrors she has faced. She jumps easily at floating leaves. She avoids the party section aisles of stores. And she refuses to come to birthday parties. She is still brave. But like the bravest of us, she is haunted by her own floating demons.
Based on a true story.The author has somehow managed to write this without bursting into too much laughter. The author’s mother is starting to feel seriously annoyed by this. As a result of this, the author may be refused some delicious, piping hot Sambar. If that the price the author must pay for a good story, then so be it. 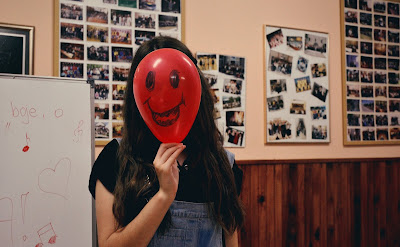