Skip to content
8:21 pm
Wasim: Asha, are you awake?
8:30 pm
Wasim: Hey? Why aren’t you replying?
8:31 pm
Wasim: Are you still mad at me?
9.05 pm
Wasim: I’m trying to call you, but the network here is spotty.
9.10 pm
Wasim: Ok, fine. I’m sorry about showing up at your doorstep the other day. I missed you so bad; I had to meet you.
9.11 pm
Wasim: Asha, I promise to change. I won’t hit you ever again. That was the last time, ok?
9.12 pm
Wasim: I love you Asha! Since the day I met you. You know that!
9.14 pm
Wasim: You think you’re so special? You’re lucky I even bother with you.
9.14 pm
Wasim: Are you sleeping with someone else already?! Damn , no wonder you refused to meet me! Who’s the guy? WHO IS IT??!!
9:29 pm
Missed Call from Unknown Number.
9:30 pm
Missed Call from Unknown Number.
9.40 pm
Wasim: Ok. I’m coming over. Don’t move.
9.41 pm
Wasim: And this time, I won’t miss. I WILL KILL YOU!
Asha huddled in the corner of her bedroom. Covered in a sheen of sweat, she stared at her phone, through blurry tears. Blinking message after message. She hadn’t bothered reading them after the first one.
She covered her ears.
(Please God! Save me! I promise I’ll do anything. Please.)
Another beeping tone.
(. This can’t be happening. Please God.)
Beep.
(Oh, please stop. Please stop. Please stop)
A new sound. Something outside her bedroom window.
Her mind flew to the last time she met Wasim. The punches. The blood. Oh God! So much blood on her. She had nearly fainted.
Scraping. Loud scraping. Directly under her window. Like someone was trying to climb up. Too terrified to go check, Asha rocked back and forth.
Why was he coming back? Why wouldn’t he leave her alone?
Silence. Asha peeked out from behind her hands. Her phone was dark. No noises from outside. A blessedly quiet minute passed. Then two.
She wiped her face dry and got up slowly. A million little points of pain screamed on her body. She bit on her sleeve, to keep from crying out. No noise now, . That would not do. That would not do at all.
Another minute. Feeling braver, she tiptoed to her bed. Grabbed her phone. Her eyes widened as she read the last message.
The knife! Where did she put the knife?
A frenzied thought fluttered through her mind, dropping new seeds of doubt and fear. (You really think a knife will stop him? You poor IDIOT!)
The telltale gleam of the blade above her dresser. A second later, it was in her hands. Better than nothing, .
A brittle stillness outside. She creeped to the window. She couldn’t see anyone (anything) outside. Was he gone?
A full five minutes later, she finally breathed out and fell back on her bed. Maybe this was over. Finally over.
Her head hurt. So bad. Eyes closed, she tried to scrub all thoughts out from her mind. Breathe in and out, .  Gently, now. Don’t hurt your tummy.
There. Perfect.
In and Out.
In and Out.
In and Out.
In and O-
The phone rang shrilly. She sat up with a start. And realized her mistake.
All this time, she’d been looking in the wrong place. Wasim wasn’t cowering UNDER her  window. He wasn’t skulking in the grass.
No.
Wasim was dead. Or at least had been when she’d left him 4 nights ago. So much blood on her. She’d nearly fainted! But instead, she’d dried her hands and double-checked his pulse. Nothing there. 30 minutes of digging; she’d concealed him and the bloodstained rock in a shallow ditch. Then picking up her bruised body, she’d trekked the 2 miles back home. Scared out of her wits and thankful beyond belief that her stalker was finally dead.
But she could see him now. Clear as day. The thick neck, those misshapen shoulders. Hair matted and covered in mud, Wasim crouched Upside Down at the upper corner of her window. Hanging like a gargoyle, looking right at her with his very blank eyes.
A logical part of her brain screamed against this perverse sight. Her heart hammered, and a sob hitched in her throat. Fingers clenched around the knife, she wept. But by the time, she wiped her eyes, her breathing had slowed down. A deep sense of calm had come over her.
Her knife. An old family heirloom. Ugly as sin, but with a shining blade of Silver. Folklore and endless movies had talked about the power of Silver against Evil. And now she was about to test that theory out.
Without taking her eyes off Wasim, Asha dried her palms. Slowly and deliberately. No mistakes this time. The knife pulsed warmly as she stood up and walked to the window. With a click, the latch came undone, and she nudged it open. Inches away, Wasim cocked his head and hissed, baring his sharp, broken teeth.
She planted her feet wide and waited. The blade shone with a hungry gleam. The glass broke as the undead man crashed into the bedroom. And for the first time in over a year, Asha smiled. 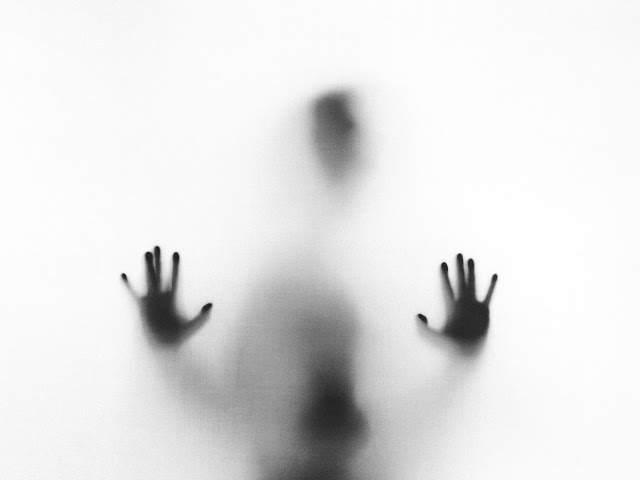