Skip to content
Trick or treat was almost over. Even the stragglers and the teenagers had done their
rounds.
And we were late. SO LATE!
. I had been looking forward to tonight for a long time. The colorful costumes, the shiny faces as kids went door to door.
I’d missed all that. Because we were late. As we walked on the dark, empty street towards the first house, I glanced at my sister. She looked furious. I laid a hand on her shoulder, but she shrugged it off. A few yards away, our parents followed, with the practiced ease of someone who’s done this a million times before.
Ah Good. The first house. Climbing up the stairs, we pounded on the door.
I flung my head back and yelled. “Trick or Treat!”
I saw movement behind the front windows. There was someone inside. But no one came to the door. We knocked and yelled again but the door stayed shut. My sister stomped her feet and cried out. Mom beckoned us from the bottom of the steps. No worries, we’ll try again at the next house.
But the same strange thing happened at the house next door. And the house beyond that one. I even did a bunch of different voices. (I had a talent for that). I hissed like a vampire and moaned like a zombie. Even  down on all fours and howled like a hairy werewolf. But no luck. We could hear whispers from inside the houses, even the occasional scream. But every single one of those doors stayed shut.
My sister was working herself up into a proper rage. She looked ready to kick down that door when dad intervened. His face flashed with anger as he reminded her it was unacceptable to force yourself into someone’s house. And dangerous too! So would she grow up and stop making trouble?
Sullen and disappointed, we walked the last few yards of the street. This year had been a complete failure. Where was the thrill of Halloween night? The sense of adventure. A bunch of sissies, I thought darkly.
And that’s when we spotted the lights. Long and low, the cottage stood tucked away in a side street. Twinkling, little pumpkins adorned the front yard. My sister and I looked at each other, both thinking the same thing. This house hadn’t been there last year. A slow smile crept on my face. Maybe there was still hope.
Her eyes flashed as she picked up her pace, with me right behind.
Knock Knock Knock.
“Trick or Treat” I called out in a soft voice. “Anybody home?”
There was silence. Nothing behind the curtains, or in the upstairs windows. Mom and Dad stirred behind us. And just when we thought Halloween was over, the door opened.
A young woman stood there, hair tousled with sleep.
“I’m sorry, guys,” she yawned. “I moved here 2 days ago, so my body clock is all off.”
She rubbed her eyes and stared at us. In awe.
“Oh goodness, your costumes are amazing! Wow!”
“Trick or treat?”, I repeated. My sister hopped from one foot to the other, positively trembling with excitement.
“Oh. Ok? How about a trick then?”
My sister turned around towards our parents. A question on her face. Mom nodded. It’s ok,
go ahead.
She opened her mouth and screeched. Then abandoning her human skin, she pounced on the woman and tore her throat. The rest of us staggered forward, our sharp teeth and skin, glistening in the moonlight.
Halloween night.
If something knocks on your door, don’t rush to answer.
Look through the peephole, peek through the curtains.
And if you see us with our white eyes and ragged mouths? Why, then lock your doors and double bolt them.
We’re shapeshifters, from the darkest corners of hell.
We love our tricks. But we won’t leave without our treats. 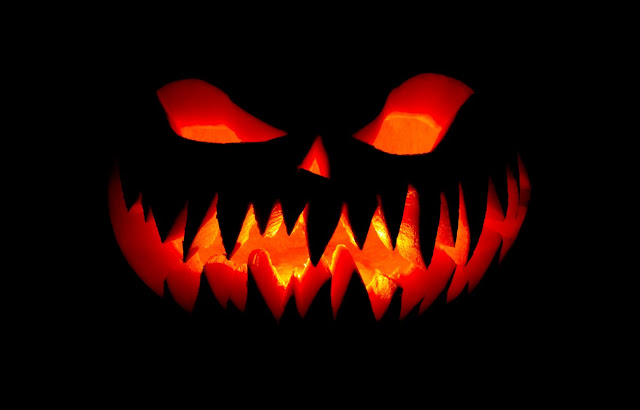