Skip to content
Button walked when he was 14 months old. He was this chunky baby, just oozing chub and so we weren’t worried when he didn’t meet some of his gross motor milestones. He’ll walk when he’s ready we told ourselves and continued kissing those fat toes.
Well, he needed help to learn to crawl and walk. Physical Therapy was a Godsend and soon he was pulling himself up and cruisin’ like a pro. He took his first steps a few days shy of his 15th month, his mouth half open with concentration and trepidation. One, two steps…  little legs pumping up and down until he did that small wobbly almost-run and reached my outstretched arms. We hugged him and cheered, proud faces and relieved glances.
I remembered every mental inch of that memory this past week when we were encouraging Button to try to walk again. His surgery went well, he came home the same day and basically chilled hard, alternating between couch and bed. We gave him his pain meds, lots of fluids and even more love. When  he looked ready to bear weight, we both held him by each arm, encouraging, goading him to take that first step. He was scared, tired and possibly filled with that undercurrent of masked pain. Walking was the last thing on his mind. His usual rewards didn’t interest him and the meds made him all dull and dopey.  As is my wont, I stressed hard about when he would want to walk again. Because he has a high pain tolerance, when he did experience pain, it was downright scary for him. I wanted his first time walking to be relatively plain sailing. But I couldn’t figure out how to make that happen – that fine line between keeping him pain free and having him in a semi zombie, unmotivated state.
Two days post procedure, he woke up looking like himself. Eyes bright and smiley and finally out of that surgery fuzz. Please walk today, I breathed silently.
And that’s what he did. One step, two steps. Mouth half open with exertion – a small grimace of pain not stopping him. Face leaner, legs longer. Unsure of his balance, but certain of his ability he walked towards us.  The same half stumble before he reached my arms. We cried and cheered for him. Prouder than ever before.
And this is just the beginning.Beautiful, imperfect, gawky steps. Baby steps. 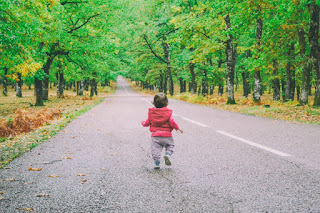