Skip to content
It’s 1 pm. The 3-year-old little girl refuses to nap. She proclaims she’s (while yawning), she insists that she has to “work” (while digging her nose) and she scampers away leaving a trail of toys in her wake.
Ok fine, I say to myself. She doesn’t really need to sleep. A different part of my brain wants to slap me hard. As a reminder of what usually happens at 5 pm when she skips her naps (hint: it rhymes with “Boeing frazy”)
A few suspiciously quiet minutes later,  a squawk emanates from the playroom. “Ammammammammma look what I did!” I rush in and see she’s scribbled over the wall with a black marker. “Look Amma! I drew you a cow”!
I don’t have the heart to tell her little face that the “cow” looks like a deranged monster that would rip your eyeballs out given a chance. Oh, and it’s also carrying a fork.
“It’s so well done, sweetie,” I lie. And now that the compliment has , and her highness appeased, I make this a teachable moment
“Let’s not draw with markers on the wall ok? It’s hard to wipe off.”
“But I don’t want you to wipe it off! I want you to have it , and for 100 days, she whines with perfect toddler logic. Pools of tears appear instantly, her eyes large and reproachful.
I have a quick mental picture of a 90-year-old me shuffling along with my oxygen tank, steering clear of the “cow” on the wall with its insane eyes. “Come a little closer, my pretty”, it hisses. “Let me taste your flesh”.
I shudder and come back to the present.
My daughter is looking at me, waiting for my response, regarding said cow. The tears are threatening to overflow. For some reason, this “cow” is very important to her.
“You know what would be great?” I say brightly. “If you drew this on paper so I could carry the cow with me everywhere I go!”
She looks suspicious. Then, because she’s 3 and trusting like that, her face brightens and she nods. “Ok. I will draw on a tiny paper for you Amma,”.
Whew! Mischief managed, I walk back to the kitchen.
A few minutes later, I hear some scratchy sounds again. I poke my head in and she is scribbling on the wall again (pink chalk this time)
“Baby! we spoke about this!”
And as I stood there, semi glaring at her, she looked at me and raised her chalky fingers to the wall again. Not breaking eye contact. Pushing her boundaries, testing her limits.Just so.
I try to practice mindful and respectful parenting. This was one of those moments which tested my patience and ability to see the big picture. So I closed my eyes and counted till 10 to get myself into a reasonably Zen, non-shouty, frame of mind.
And when I opened them and looked at her, she says, “Amma, it’s ok Amma. I was just writing my name. And look, it’s walking away because you don’t like it.
I looked at the wall. She’d thought of everything. True to what she said, her name in reverse, “going away” from me. In big pink block letters. A-Y-E-R.

I sat down and laughed till my sides hurt. She soon joined me. After a good while, she got a wipe and the wall. But not before I got a picture first. Because I need something to smile about when the “whacko cow” finally kills me. 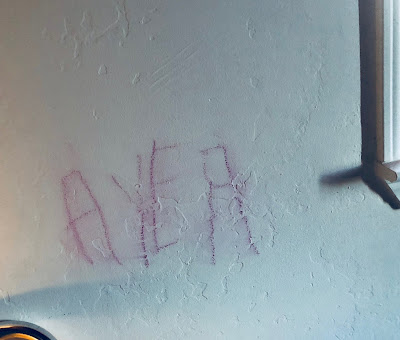