Skip to content
The moonlight gently hit the sloping roof of the house and then popped inside the open window. The bedroom attached to the window was rather average. A dresser, a closet, a door leading off to the en suite bathroom. Nothing special. Standard pictures of happy smiles adorned the walls. A large bed took up a corner of the room where 2 shapes lay sleeping. An adventurous moon beam glided over the man’s face. He mumbled something and rolled over, pulling the smaller figure of the woman closer to him.
Nothing much happened for a while after that. The moonlight danced around; touching this and that, illuminating corners and dust bunnies and the lone earring that had fallen behind the bed. It was a rather peaceful scene, a quiet night punctuated by the soft snores of the woman (who would deny any such thing, when awake).
A sudden furtive movement showed two shadowy figures at the open door of the bedroom. They were huddled together, not touching anything. Just standing there. And watching. Watching the man and woman sleeping on the bed. They breathed in tandem with the sleepers, waiting for the right moment to change the night.
“Him or her?” whispered one.
“Her”, said the other, nodding a head in the direction of the sleeping woman.
“Why not him? He’s the bigger one. Stronger?”, said the first voice.
“He may be bigger, but she’s scarier. We should choose her.”
A pause and then two sets of brighter-than-normal eyes looked at each other. Then they glanced down at the sword, gleaming in the borrowed moonlight.
“Is that really necessary?” asked the first voice. Contrary to his size, he wasn’t the leader of their twosome.
“Of course it is! What if I have to fight more demons when we’re here?”
The first voice thought about that for a while then nodded. He knew better than to argue with his boss.
“We don’t have to do this you know. We could just go back,” he ventured.
“Shush! Listen!” she hissed.
A long spell of silence followed. Then something thudded one floor below them. A muted sound, easy to miss if you weren’t paying attention. A noise that could be attributed to the settling down of an old house. But equally likely to be coming from the footsteps of a monster, taking the stairs two at a time.
The figures looked at each other. Still rooted to the doorway. Still clutching the gleaming sword.
Another thud followed the first one. Louder. Maybe Closer.
That decided matters for them. In a surprisingly noiseless whoosh, they slipped into the room and closed the door shut. Tiptoed to the bed. Made their way to the sleeping woman. The larger of the two figures, placed a hand over the woman’s mouth, while the smaller figure raised her sword and waited for her cue.
The woman opened her eyes, disoriented by the sudden pressure of a sweaty palm on her face. She blinked then stared. Confusion and fear clouded her features as she scrambled to sit up. The larger figure shook his head, admonishing her for making all this noise. The woman looked down at her husband sleeping beside her. Then at the raised sword glinting and gleaming wickedly.
She took a deep breath. Thought about screaming then decided against it.
Moving the hand away, she asked in a patient voice.
“What’s up kiddos? Couldn’t sleep? And Lena, why do you have your toy sword with you?”
The little girl looked both embarrassed and annoyed. Her brother whispered.
“Mama, we heard noises. We didn’t want to wake you up. I told her not to but-Lena-was-scared,” he finished in a hurry.
“I was not! I have my sword, see? It can kill all monsters!”
The woman looked at her two kids and sighed. That was the last time she was doing laundry at night – the damn dryer was just too noisy and rickety.
“Mama can we sleep here tonight? Please mama. Please, mama?”
“Well ok. Let me wake up daddy and he ca-”
“No!! You go check the house mama. We’ll keep daddy safe here. You’re scarier to monsters, anyway,”.
Ten minutes later, the house checked and curtains drawn, four figures cuddled in the warm, big bed. The man, slept on, dreaming of a large car that suddenly seemed very stuffy and small inside.
The boy snuggled and burrowed into his dad’s warmth; the girl did the same with her mom. The woman blinked and tried hard to fall asleep. She was slipping into a dreamlike state when she heard a noise. Was she dreaming? She was too tired to decide. So she did what any sane person would do. She kept a firm grip on Lena’s sword, snuggled into a fragrant mop of curls and fell into a deep sleep.
Disclaimer: this isn’t supposed to be a suspenseful story. Not beyond a certain point anyway. Most of you will guess it’s the kids because you have been woken up this way countless times. Countless, tiring, humorous times.
It’s just my attempt at narrating one of those “OMG there are no monsters, just let me sleep already” stories, with a small twist. 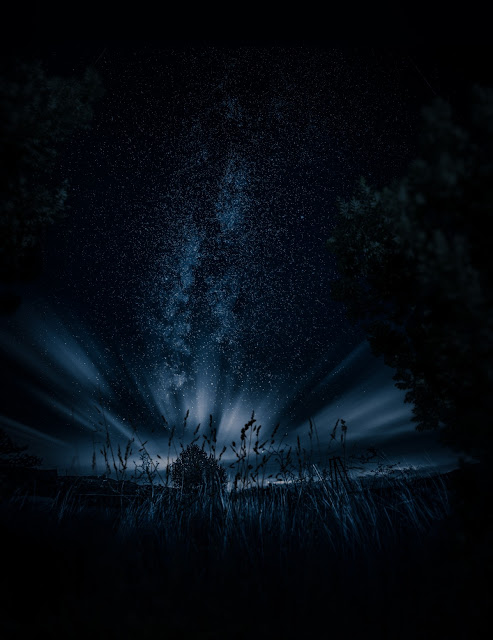