Skip to content
“Julie, hold my hand, please,”
“Can you move faster? We’re almost there.”
“I’m scared Julie. We’ve never traveled this far. And this late at night,”.
The wind moved around them, whispering under the dense canopy of trees. There was no visible path, this deep inside the forest.
But Julie seemed to know exactly where to go.
“Come on Peter, we cannot be late!”
A twig snapped somewhere to their left.
Julie and Peter stopped. She strained her eyes, but spotted nothing. What was out there, this late at night?
Peter tugged at her sleeve. His large eyes, shimmered in the paltry moonlight.
“I’m scared, Julie. What was that noise?”
Paler than before, Peter looked at the distant clearing, where he saw a murky shape moving about. He was about to protest again when Julie brushed past him.
“Julie! JULIE!”, he whispered urgently. “Stop! Don’t go there! I see something!”
She turned around and looked at him sadly.
“We’re Peter. It’s almost time. You know what happens at 3 am.”
“But Julie! That is a bad thing. It will hurt us!”
She placed a small palm on his cheek.
“I promise it won’t, ok? I’ll protect you always. Now hurry!”
Forlorn and with nowhere else to go, Peter followed his big sister. They crept past the last trees and stood at the edge of the clearing.
A fire burned brightly in the middle. A dark shape stood by it, drinking something.
Julie nudged her brother.
“I’ve been tracking it for a while. It always comes here once a month. And you remember what today is, right?”
Peter nodded, glumly. He was well aware of today’s significance. But that didn’t mean, he had to like it.
“Peter, look at me! This is important, ok? I can’t do it without you.”
“I’m sorry. I’m just afraid.”
Julie looked up at the sky. She’d learned to read the positions of the moon. It was time.
3 am. The Witching Hour. A time when the door between the human world and the paranormal opens wide. And unleashes the monsters from all corners of hell.
A sudden wind gusted through the clearing as the little girl and her brother stepped out of the shadows. The fire flickered and then died out. Surprised, the dark shape turned around. At first, it saw nothing.
Then something gleamed at the edge of the clearing. 2 children stood there, quietly shimmering in the moonlight. The man, blinked and looked again.
They were closer now, their eyes red and luminous. The smaller of the two children still had a torn belly, his pearly white intestines popping out. And the girl. Half her face squished in, like an oddly deflated ball.
Memories came rushing to him now. A year ago. The bar where he had one drink too many. The winding forest road he took that night. The sudden screech when he hit something. Too drunk to care, he’d revved his engine and pushed down on the accelerator. A sickening crunch under his wheels, and he’d driven off, thinking about how nice some vodka would be, right about then.
3 am. The Witching Hour. That door was wide open. And not more than 30 feet from where they’d died exactly a year ago, Julie and Peter dragged the man back into their world.
And now they would make him pay. 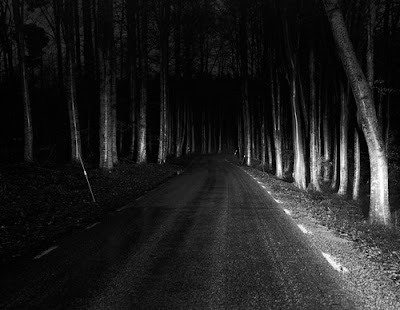