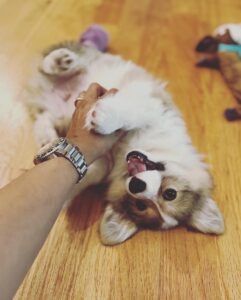 Apparently, dogs love praise. They need it; they enjoy it, and they thrive on it.

“The gift of positive reinforcement is something every puppy strives for. It boosts confidence and strengthens the bond between owner and pup.” – direct quote from an online dog training course I signed up for.

I took that to heart. I read up on the basics and kept treats handy. My training sessions with Minnie and August were short, fun, and well-padded with praise. Being EXTREMELY food motivated is part of their corgi genetic code. So they were star pupils as long as they knew that a crumbly peanut butter cookie was coming their way. I used that to my advantage and got them to master simple stuff (or, in Minnie’s case, a refresher).

And midway through the first module, the course said this: “Now that you have a routine, finish every training session on a high note. Put away the treats and get down on the ground to give your dog some love.”

So, after the first few training sessions, I tried that. Kept the treats out of snout’s reach and rubbed their bellies. Cooed in a high-pitched voice and told them what amazing dogs they were.

Two pairs of eyebrows went up. Augie sniffed my fingers and realized the treats were gone. Minnie confirmed this and borked in my face.

But that didn’t stop me. “Good girl! Who’s such a good girl? You are, little Minnie! You’re the cleverest girl in the entire world, aren’t you? Aren’t you?”

He did NOT show me his tummy. Instead, he did a yappy little dance and squeaked bitterly. Egged on by this brazen display of rebellion, Minnie ran circles around me, borking her obvious displeasure at the lack of carbohydrates.

Razor-sharp puppy teeth sank into my big toe. Yelping, I sat down and rubbed my foot as two fluffy butts waddled away in indignation.

Another line from the online course floated into my mind. “Interestingly, some dogs will even forego a real treat, just for an extra minute of belly rubs. This is also the foundation for weaning them off food as a reward.”

Moral of the story: Don’t believe everything you read on the internet.